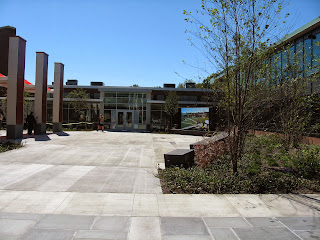 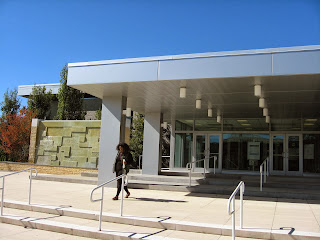 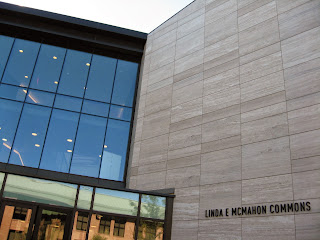 In late September, I set off to Fairfield, Connecticut to visit a private Catholic college, Sacred Heart University.

First, I had a tasty lunch in the McMahon Commons Food Court with a student I had worked with, who is now a Sacred Heart Sophomore.  He told me, “I fell in love with the school.”  He was looking well and was involved in college life through bowling, the choir, community service, and campus ministry activities.

Then, off I went to the information session and tour.  Here’s what I learned.

Basics - Sacred Heart was founded in 1963.  It has about 3800 undergraduates with an average class size of 21 and common core classes of between 20 and 30 students.  There are four colleges: Business, Education, Health, and Arts & Sciences.

Extracurriculars - Students can get involved in the over 80 clubs and organizations.  These include athletics, theatre arts, Greek life, community service, and more.

There are four fraternities and six sororities at Sacred Heart.

Housing - Housing is guaranteed all four years and is required for the first two years.  The dorm rooms include a mini-frig and microwave.  Upper class housing is not on the main campus.  There is shuttle service to upper class housing, the supermarket and the mall.

Applying and Financial Aid - Sacred Heart is a Common App school.  The average GPA of the high school student who applies is 3.2.  The school is test optional, with an SAT average of 1100 (Critical Reading and Math) and an ACT average of 24.  There is Early Action, Early Decision and Regular admission.  On the financial aid side, Sacred Heart is a CSS/Profile school.  93% of students get financial aid.

What is your experience with Sacred Heart?
Posted by Rana Slosberg at 10:13 AM No comments: 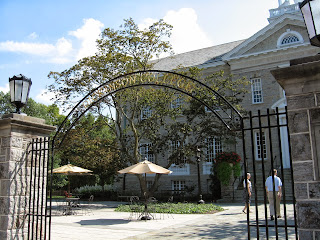 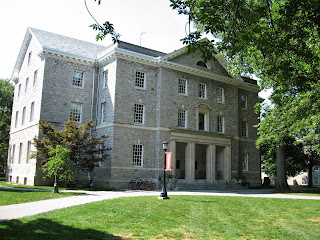 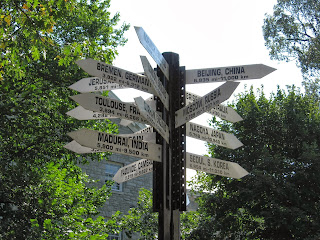 Academics – Dickinson has 42 majors.  34% of the students are science majors. Business, economics, political science and history are also popular majors.  Spanish is the 6th most popular major.  Students can develop their own major.

66% of the majors have a global perspective.  50% of the professors have lived abroad.  Dickinson offers 13 foreign languages, more than any other liberal arts college in the country.

The average class size is between 16 and 17 students.  There is a close student / faculty relationship.

The school studied retention of knowledge and decided to make their classes into workshops with hands-on application.  For example, instead of taking Biology 101, students might take the Science of Cancer. Students studying science, do research.  65% of students will do an original publication before graduation.  Art history majors must curate an art exhibition before graduating.  There are two archeology labs that simulate dig experience, as well as opportunities to participate in archeology digs in two locations.

There are general education requirements, which include a freshman seminar, a US diversity class, 2 lab sciences, 1.5 semesters of physical education, and classes from three different areas.  Being “green” is integrated into the curriculum.  ROTC is available.


Study Abroad and Internships- 60% of students study abroad with 85% of them on a Dickinson program.  Financial aid can be used for study abroad. The Dickinson study abroad programs are not in major tourist cities; they have their own buildings and staff and students have an opportunity to do an internship while abroad.

85% of students do internships.  Internships in New York City, Washington, DC, and abroad are available.  Greg studied abroad in Italy and completed an internship there with a boss who only spoke Italian.

Students – 81% of the students are from outside of Pennsylvania.  Students come from many foreign countries, with the largest numbers of foreign students coming from China and Bulgaria.

Surrounding area – Dickinson is in Carlisle, Pennsylvania, which is the county seat.  In addition to Dickinson College, there is the Dickinson Law School, a war College, and ballet training in Carlisle.  There are 33 restaurants within 3 blocks of the college.

Extracurriculars – There are 125 clubs.  35% of the student body goes Greek.  Men can rush in the second semester and women can rush in the third semester.  Students have done 46,000 hours of community service in Carlisle. The men’s lacrosse team was second in the nation last year. There is a strong mock trial and debate team.  Intramural and club sports are popular, including  equestrian.  You don’t have to be a Theatre major to be involved in the theatre productions.
Facilities – There is a “new” $85 million science center.  The college has a 188- acre organic farm six miles from the main campus; the produce is used in the school dining hall and also supports a local food bank.

College history – Dickinson was founded by Dr. Benjamin Rush in 1786.  Dr. Rush was a physician to George Washington, the founder of psychology, an abolitionist, wanted students to be educated in useful arts and sciences and to push them intellectually.  Dickinson was the first US college to offer modern foreign languages and the first to offer field study.  This history infuses what happens at the college today.
Posted by Rana Slosberg at 3:48 PM No comments: